By monitoring the location of smartphones, it is possible to follow users everywhere at every turn. Movement flows are now created everywhere in Europe.

Anyone who is sensitive to an infected person will receive a red color code. When visiting a zone where someone with Covid-19 infected person recently stayed, you are classified as yellow, otherwise, you are colored green and may travel freely: This is roughly how a service provided by the Chinese IT group Alibaba Group works which the Chinese government wants to curb the coronavirus.

Worldwide, the pandemic employs governments that try to restrict the spread with more or less restrictive measures. China is most likely to attract attention, but other countries are gradually also presenting which instruments they have in the field of mass surveillance in the repertoire - keyword geo-tracking: the smartphone uses GPS via the regular cell phone connection, a variety of technologies that allow the location to be recorded. This is information that is stored over a longer period of time - and can also be used by the state to curb the spread of the virus.

The US IT giants Google and Facebook are also considering analyzing user movements to find out how widespread the virus is in the United States. You also want to find out how effective a quarantine is.

What does the data bring? Professor Caroline Buckee from Harvard University in an interview with "Wired" says that they should have a little point in predicting the spread since it is unclear how many are actually infected. In Austria, too, tests are only carried out if there is a specific suspicion that distribution chains are lost, so it is not unlikely.

But: The data is probably useful to ensure that users adhere to guidelines such as a curfew. This method has also been used in Germany, the mobile operator A1 created movement current analyzes for the government. Anonymous according to their own information. In Germany, the Robert Koch Institute receives data from telecommunications providers. And similar action is also being taken in Italy to find out whether users stay at home. According to Buckee, with such a use it is important that it is not possible to draw conclusions about users.

The situation is a little different in South Korea, a country that is repeatedly praised for its handling of the crisis - there is extensive testing. Together with smartphone tracking, it is determined how the disease spreads. Data such as credit card transactions from infected people and images from surveillance cameras are used, which are combined with the official information on verifiably infected people. Users can then see where people have been with the virus.

he Chinese government is resorting to even more restrictive means. Since most services in China require a digital ID, it is possible to find out whether a citizen has been in contact with people who have been shown to be infected. If this is the case, you will be notified and sent to quarantine - yellow means seven days, red 14. In addition, a massive network of surveillance cameras with facial recognition technologies is used. In public places, these are used in conjunction with automated fever measurements to identify people who may be ill. 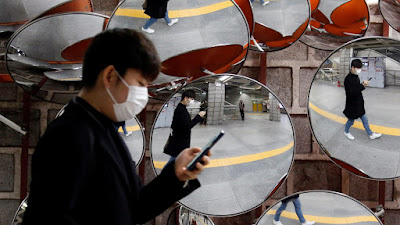 Meanwhile, the Israeli cabinet decided on Tuesday to monitor coronavirus infections and suspected cases. They rely on methods that would normally be used against terrorists. Accordingly, mass monitoring via geo-tracking is planned. There was criticism because the Ministry of Justice initially wanted the measures to be brought through the Parliament, but was ultimately bypassed. At the same time, the controversial spyware company NSO Group wants to offer its software for smartphone user monitoring to stop the spread.

This shows that the pandemic is a positive economic factor for IT companies that specialize in surveillance technologies. Because while most companies have to close their doors and suffer economic setbacks, it is the large IT companies that benefit from the situation - their software and services are particularly in demand at the peak of their spread.