According to Allaboutphones the Google Maps team plans another new feature within their Maps application for Android: Google Maps offline Navigation. With this feature Google Maps will compete with traditional navigation companies such as TomTom or Gamin. It is not exactly known how this new possibility in Google Maps will work. But it can be assumed that your Route has been planned in advance and related map information is downloaded on the phone as long there is connection to the web. After downloading the route, you can start your trip and go to "offline mode". 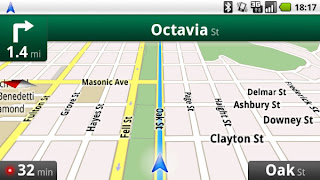